The reason I started this blog two years ago was to connect to those who helped fund my science through the SciFund Challenge. Crowdfunding has come a long way, even since then, and I hope that my funders have been able to check back time and again to see how my PhD is progressing. However, after the t-shirts were sent and the thank-yous were written, I haven't shown much about the salamander for for which I was so graciously supported by a group of science-loving citizens.

One thing that is difficult to appreciate about science: it takes a long time. Creating new knowledge is tough. From generating new ideas to collecting and analyzing large amounts of data to having your work evaluated by your peers, even small projects can take years until the product of all that work is produced.

I'm thrilled to finally have the first scientific publication resulting from crowdfunded support officially in press. The paper is titled "Evolutionary basis of mitonuclear discordance between sister species of mole salamanders" appeared in volume 23 (issue 11) of Molecular Ecology. If you take a look at the acknowledgements at the end of the paper, there is a specific sentence where I send my thanks to all of those who funded my work through SciFund. How cool is that!

The data that was collected for this project was done while I was in the field working on the Ambystoma dispersal project, and my Scifund support was much appreciated during the associated travel across the state of Ohio.

So, that sounds nice, but what is the science?
One thing we noticed when looking at the salamander samples that we had from all across Ohio: some of the species of salamander were showing up in weird places. Particularly, these two sweethearts: 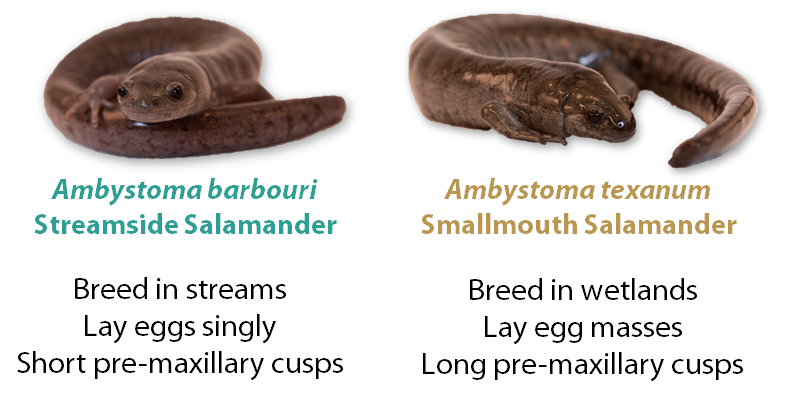 The salamander above on the left is only found in the very southwest of Ohio and is mostly located in Eastern Kentucky. The reason? The Streamside Salamander loves to breed in small streams that don't have fish. In contrast, the Smallmouth Salamander, which is found over most of Ohio and across a wide part of the central United States, only lays its eggs in ponds and other wetlands that aren't streams.

Here are some of the areas we find these two salamanders ("sympatry" just means they are found in the same county): 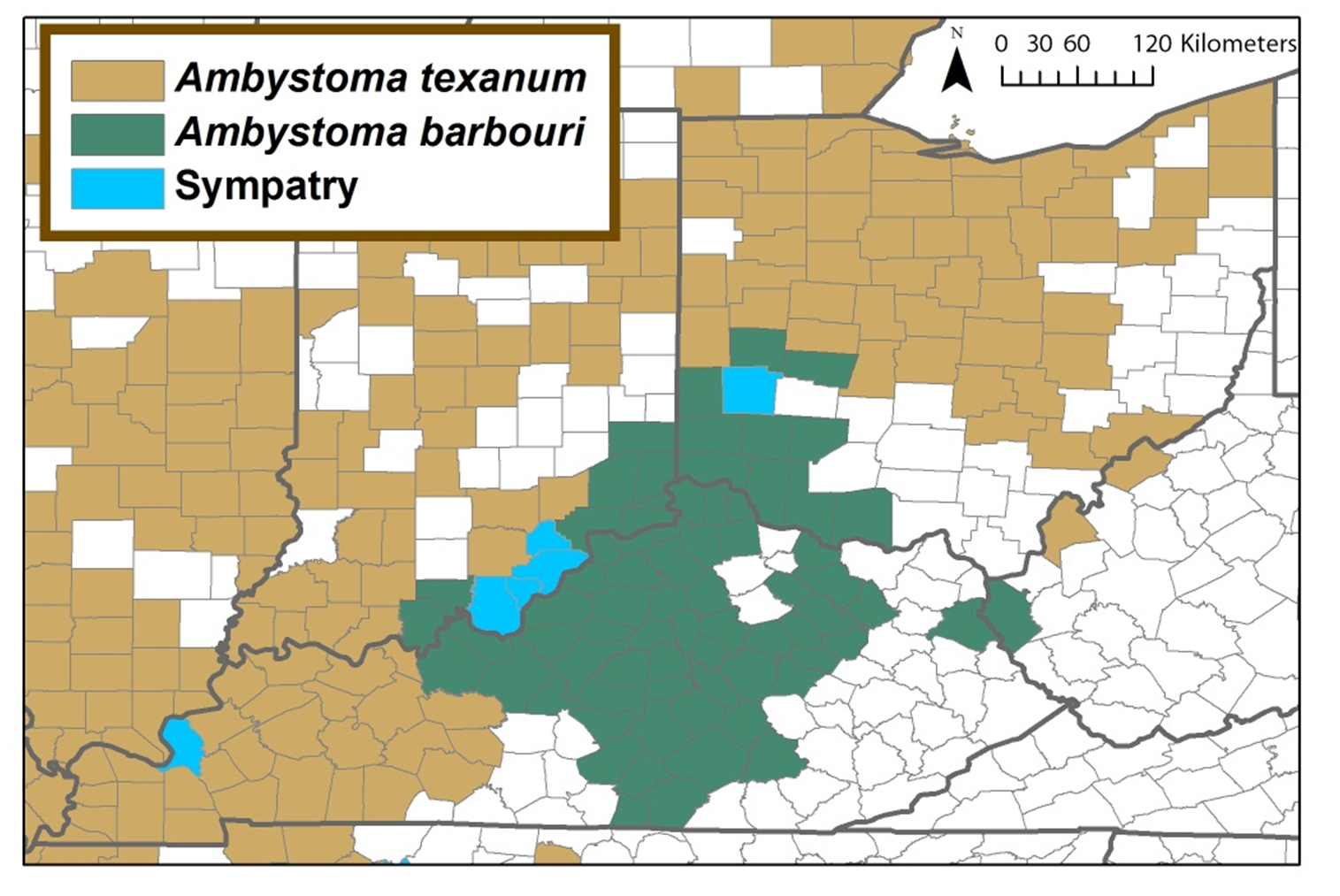 BUT, when we used DNA to identify the samples we had from across Ohio, we identified many animals as Streamside Salamanders that we were almost sure were actually Smallmouth Salamanders.


We found these animals in ponds (not streams) and they were well outside of the above range of Streamside Salamanders. Since we only had DNA samples, how could we figure out what was going on?

Because we were using tiny pieces of DNA from the salamanders' mitochondria, there were three main explanations for this unexpected pattern:

So, we could be observing 1) a misidentification of the central Ohio salamanders or 2) the presence of mitochondria from one species inside the other species (weird!) or 3) hybridization between the two species.

We used DNA collected from both the mitochondria and nuclear DNA of salamanders from all across the state to show that mitochondria inside of the Smallmouth Salamanders in central Ohio are invaders from the Streamside Salamanders, a biological process called mitochondrial introgression.

Mitochondrial introgression happens when two species hybridize at some point in time and the mitochondria that comes from the female of one species becomes abundant in the other species, either by natural selection or random chance. As strange as it sounds, the phenomenon is well-recognized and has been identified in a diverse group of animals. 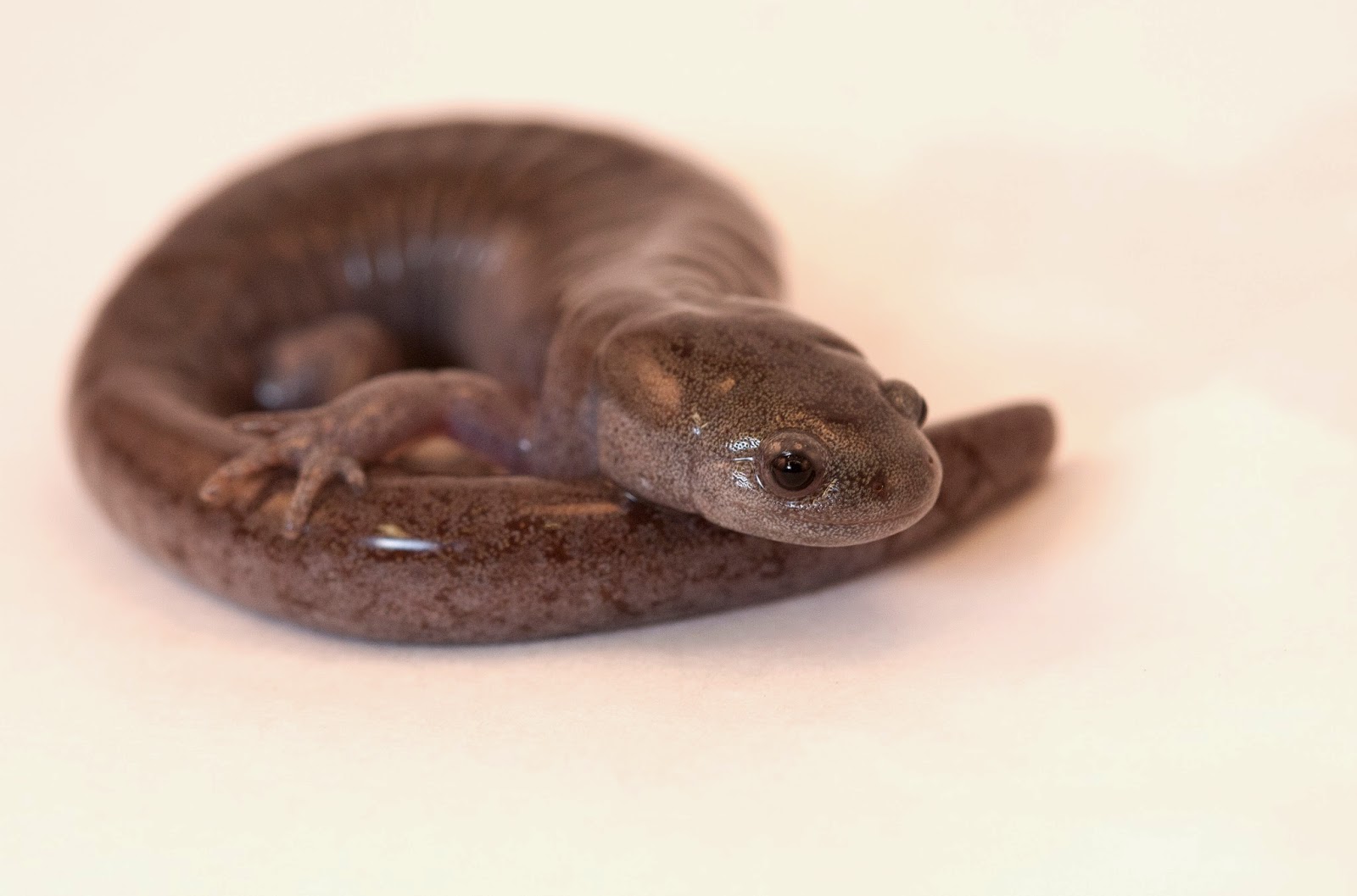 So why is our publication important?
First, we solve the mystery of finding salamanders with strange DNA by using a bunch of different genetic techniques. Our methods show the pros and cons of the different ways that scientists have tried to study mitochondrial introgression in the past and provides a guide for how to use these techniques.

Second, we took a look at all of the locations where we find salamanders with mismatched mitochondrial DNA and found that these wetlands are located in places with significantly higher rainfall during the spring and summer. This could be a sign of an adaptive link between the foreign mitochondria and a wetter environment.

Making the links between patterns of foreign mitochondria and their adaptive advantages is important and finally becoming common. Other recent publications like ours have shown both advantages (in Warblers) and disadvantages (in Long-Toed Salamanders) to having an introgressed mitochondria. Using genetic information, scientists are finding out what evolutionary processes are happening hidden from sight inside the animals of our backyards. Pretty neat.